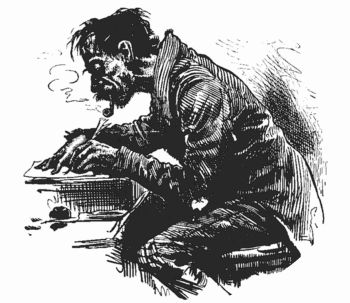 Lots of writers I know thrive on sadness, depression, and lesser forms of melancholy like ennui. General unhappiness allows their writing to thrive, as they delve into the depths of their perceived misfortune to generate poems and stories dripping with tragedy and loss. For them, writing is catharsis, and by inking out their woe, they regulate their emotions. Some even manage to publish their diatribes of disaster, and this recognition provides them with enough dopamine to jump successfully to the next pseudo-crisis.

I’ve never been one of those people, and frankly, I can’t imagine living that way. Sure, I’ve had some down times here and there, but writing about them only seems to provide a “mood puddle” in which to wallow. I feel much better when I devote myself instead to writing on subjects unrelated to personal tribulation. Rather than catharsis, writing is occasionally my escape. More often, it is the purposeful pursuit of inspiration. Occasionally, those inspirations are sad, but I’m no Edgar Allan Poe.

Also, I’ve found that if I’m feeling blue, it’s probably a symptom of some illness beginning. Malaise, that low emotional wave preceding a sick spell, has never been my friend, and it certainly doesn’t generate good writing. I need a relaxed-yet-lively mind and a keen awareness to produce my best work, and being down inhibits both of those.

Maybe you, reader, take to the page to overcome spells of sadness. If so, may that form of therapy be your balm. I, for one, intend to remain a writer of clear-headedness and contentment. While my work may occasionally fall into the wells of woe, my hope is that those spells are mere diversions rather than the usual route. Write on!

One thought on “Hold the Malaise, Please”