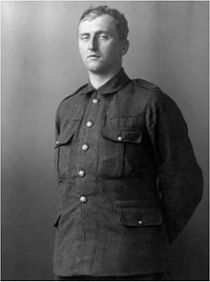 T.E. Hulme wrote six poems in his life, with the best known piece being a short little near-pastoral titled “Autumn.” But this Englishman, who fought in World War I, is known better for his attachment to other greats. The company he kept included big names in the world of poetry, including Eliot, H.D., and a number of well-known imagists. He joined poetry clubs and took part in literary events where better-known authors read and were celebrated, and in 1917, he was shot and killed in wartime. He was only 34. His legacy today is largely attached to the reputation of better-known names from literature like those mentioned above. Scholars today refer to him more as a “critic” than a poet.

The lesson of Hulme’s life is one all writers, and especially poets, should take to heart: While being around “names” might be exhilirating, and doing so may have its own benefits, it is imperative that we not forget who we’re really in this business for — ourselves. Oh sure, I could go on some great philanthropic rant about how writing is “all for the readers,” or “to make society and culture better,” but at the end of the day, let’s get real: The reason writers write is to be read and recognized by others. No matter how charitable or noble our other motives may be, the one driving force behind writing is the thought that someone else will take in and appreciate our words.

So, if one is constantly “hanging around” others who are already established, that might be fun and even rewarding, but honestly, when the fat lady sings, who wants to be remembered as “that guy who hung around (famous name here)?” Making a literary contribution demands more than being the bookish equivalent of a Kardashian. Staking out one’s own path and territory is as necessary in the writing world as it is in business. Warren Buffett didn’t get where he is by riding the coattails of Rockefellers, and today’s writer can’t expect to be remembered by sitting on Grisham’s front porch, either.

Certainly this isn’t to say that receiving mentorship from “names” isn’t helpful; it definitely is. But at some point, it’s time to leave the nest and spread one’s own wings. My aspiration is that, when my time comes, I’m not put into the history books like Hulme; by then, I will hopefully have made a significant impact that is beyond “knowing and imitating good poets.” No doubt my writer friends desire something similar. Let’s begin forging that path today. Our literary legacies depend upon it.