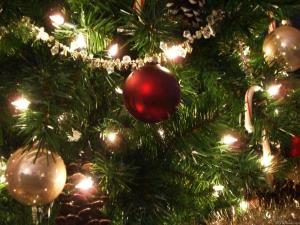 One of the best things about being a poet around the holidays is the reflection that generates so many great memories. Ideas spurred on by recollections of past Christmases or realizations that take place here in the present are equally powerful motivations to write.

The one cautionary admonition I would issue to my fellow writers, however, falls into that dreadful category of avoiding bathos — that ripe sentimentality (see prior posts) which lessens the power of our words. Holidays become great cliche fodder; all the old pieces of language from carols and cards come flooding back to our brains, and if we aren’t careful, they’ll seep their way into our writing and stink it up like expired egg nog.

With that word of sufficient warning, allow me to make one slight allowance — writing work that alludes to Christmas carols or other seasonal cultural icons is entirely different. Starting a poem with “Silent Night, Holy Night” and then altering it to convey a completely different message than the old hymn is  okay. Moreover, it’s a world apart from describing one’s past family celebrations as “holly jolly” or simply “merry.” Yuck!

The challenge for writers of all genres is finding new ways to express the oldest of great notions. When Dickens penned A Christmas Carol so long ago, you can bet that he knew his message was not novel — “greed bad, generosity good” had been a maxim for generations before Ebenezer Scrooge existed. But through memorable characterization, engaging dialogue (who doesn’t know “Bah! Humbug!”) and other tools of the trade, Dickens was able to render a masterpiece that has been adapted and enjoyed for more than a century.

As writers, the greatest gift we can give ourselves this season is new perspective. Let’s leave the old wrapping paper of holiday hackney in the dark recesses of our mental attics, and erect the fresh green boughs of our modern perceptions and expressions. As our memories and our current situations blend warmly in the glow of the holidays, let us task ourselves with the duty of renewal and re-purpose. The ghost of Christmas yet to come will thank us for it.