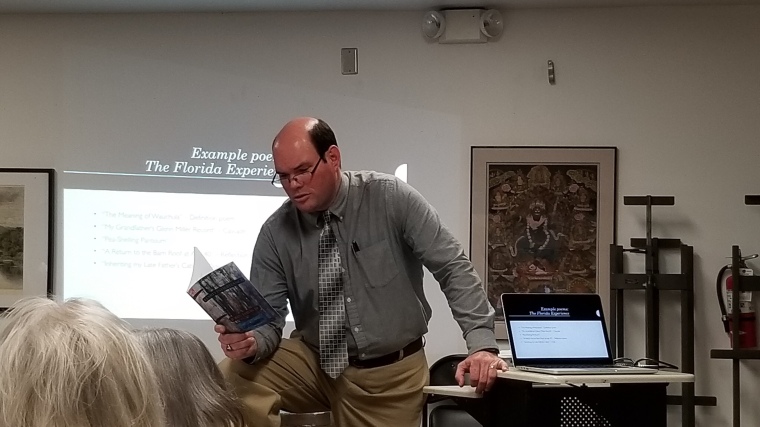 For about six months or so now, I’ve been volunteering for a local arts organization. I’ve provided workshops, seminars, and even the occasional reading. Here’s what I’ve learned: The most rewarding part of being a poet is passing on the joy of writing to others.

Sure, that sounds trite, but it’s true. And it’s not that I hadn’t grasped this notion previously. I mean, I’m a teacher after all. But here’s the thing — teaching adults who truly want to learn the craft is a world apart from teaching English courses for a paycheck.

I get to have a good time discussing poetry and how to make it, and newbies find out a few tricks and techniques that perhaps they hadn’t considered. My favorite is the generative workshop, where we use various prompts to craft the beginnings of new work. That silent hum of concentrated creativity fills the room, and you can tell that vivid things are happening in everyone’s mental theater. It’s almost (cliche warning) magical.

And while I love my day job and all it provides, for sheer joy of teaching, it’s hard to beat the volunteer space. No grades, no homework, just genuine fun with words. I’ve also noticed that giving back a little something to the craft that has meant so much to me restores my passion for the written word. Watching people grasp the potential of poems reminds me why I do this work, and believe me, it is work. But it’s a labor of love, certainly.

Those who’ve followed my blog for a while know that I have a “writing room.” Back in the seventies, this room was the formal living room, and after my second son was born, I transformed it into my studio (since I had willingly transformed my previous study into a nursery). In this room, we installed a large picture window that looks out across Lake Elbert. I do most of my writing in view of the lake.

But today’s post is less about the room itself and more about that window — the one that allows me to clear my head of other outside influences and reach a state of creative clarity. This morning, you see, I had to go outside to clean the window. Living on a lake means tolerating the Daddy Longlegs, dirt dobbers, and other occasional creepy crawlies that want to claim your open porch as home. But when they start to encroach on my view, then the gloves are off. As I was scrubbing, I realized, as many poets have, the metaphorical power of windows. Granted, this was not some new, earth-shaking revelation, but simply a restatement of prior knowledge: windows in literature have served as eyes, symbols of transparency or opacity, and they have taken on a wide range of other meanings, depending on the work’s needs.

For us as writers, however, our window on the world (both literally and figuratively) must always remain unclouded. If we allow streaks or stains in the form of distractions, worldly worries, or doubts about our abilities, then the inspiration stops. Just as the window works best when clean, so too, does our writerly vision work best when we free it from the dust of politics, society, career, and finances. Maybe your window is clouded with something else — grief or glee, negative or positive stress. No matter what the “smudges,” we as creatives must get out our mental Windex, and keep the view inspirational. Clean your window, reader. Your work will thank you for it. 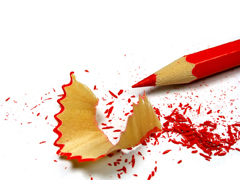 Recently I’ve had the privilege of providing feedback to a budding poet whose work has been compiled into a chapbook. I see a lot of my own history in this poet’s words — as he has been exploring the tools of the trade, there’s the occasional overuse of alliteration (we both love the smart rhythm and happy repetition of consonant sounds), but there’s also this vibrant joy that comes with writing for writing’s sake.

This gentleman’s work has reminded me of my own roots as a fledgling poet. Before any fancy MFA programs, before any acceptance letters or awards, there I was — that beginner who scribbled out potent images and happily entangled words for the sake of seeing and hearing their interplay with one another. At some point along the writing journey, as I learned more of the “rules” and what to expect from diverse audiences and editors, somehow a little bit of that word-joy vanished. Writing poetry became about using literary devices and styles that others dictated were “the right way.” And while others’ perspectives are always helpful (even when they’re hurtful), at some point we as poets must step back from others’ voices and ask ourselves, “Is this really ME?” We would be wise to adhere to the admonition that Polonius gives to his son Laertes in Shakespeare’s Hamlet: “This above all else: to thine own self be true.”

That doesn’t mean that we shouldn’t consider others’ points or feedback; indeed, if we want to excel as writers, listening to credible responses will strengthen our work greatly. But when that advice begins to fly in the face of one’s own vision, then it’s time to gain some distance for the sake of clarity. In a few days, I will be headed over to Tampa for my summer MFA residency. While there, I will be engaged in workshops and seminars, many of which are intended for the critique and strengthening of my poems. As I listen to my peers and hear their thoughts (positive and negative) about my creations, I hope that I can keep that beginning-writer passion alive. When the bliss of writing is gone, nothing remains but sheer mechanics and accumulated letters. And when writing becomes the equivalent of intellectual ditch-digging, it’s time to stop.

Every decent writer has some key memories that, when recalled much later, prove to be fertile ground for literature. Whether it’s a childhood recollection, a happy vacation from adolescence, or even a school-related flashback (see photo), every memory holds the potent possibility for springing to life in new writing.

In this case, I never really considered the smaller details of that New York trip from decades ago. While there, we had to ride buses to various venues. Being the small-town boy that I was, I had no familiarity with tokens and procedures related to mass public transit. As a result, I held onto my bus token instead of depositing it rightfully.

While digging through my sock drawer recently, I found that old token, and a million memories of that trip came flooding back: Broadway musicals, FAO Schwarz, the Statue of Liberty, the Empire State Building, and so many other sights and sounds were generated by this one tiny piece of metal.

When I sat down to write about it all, however, I dismissed the tourist traps, the typical big-city experiences, and all the fluff of a trite “cultural shift” poem. Instead, I began to focus on the minutiae of that one moment, getting onto the bus without paying all those years ago:

Mr. Bus Driver, I didn’t know
where this metal disc was supposed to go
in 1990. I faked the deposit:
no token, just motion before taking
an inconspicuous seat beside classmates.

I know you don’t believe me.
Neither do I.

A bronze and silver guilt memento:
City of New York Transit System raised letters
round as a steaming manhole cover. This passage
pressed around an accusing bull’s eye – target
of my crime: petty theft by a small-town minor.

The piece in all its particulars, I believe, is far stronger than a “big picture” poem that tries to capture all the landmarks and sensations of a city too large to do justice in a single piece. Many years ago, Richard Hugo wrote a nice little guide to poetry entitled The Triggering Town. He encouraged poets to “adopt” a town they knew nothing about, approaching it as though they were someone who’d lived there for years rather than an outsider. This practice, he wrote, would allow a writer to generate new ideas and material. Indeed, it has worked for countless poets throughout history. New York was not my “triggering town.” But, its sensations, its differences, and its expectations from more than 20 years ago certainly gave rise to a piece that is unique. Only through artistic distance are we able to see some things for their truest significance. Like old farmhouse windows, the warps and waves in the lens of time give rise to pictures, that, while not totally accurate, make our human experiences more meaningful. The lesson for poets and writers everywhere? Look back to look forward.